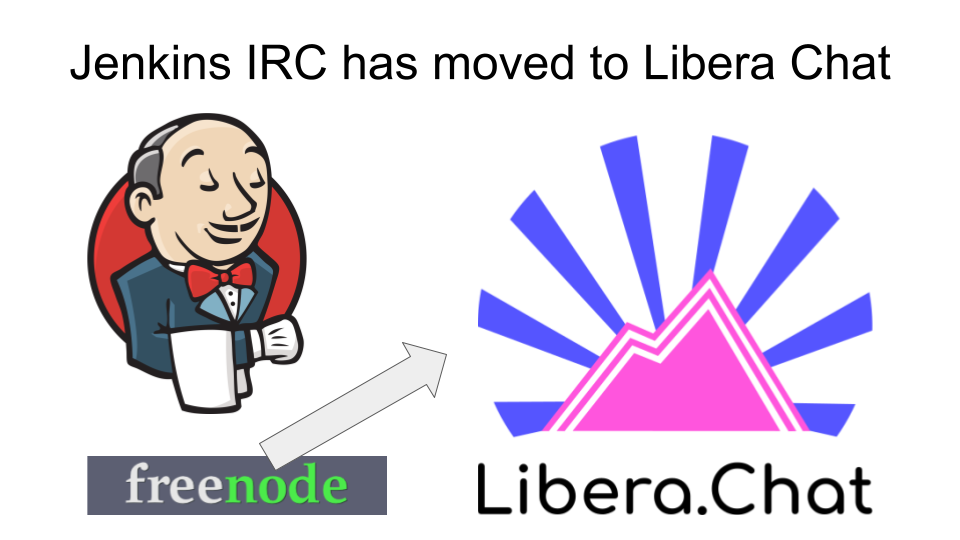 We are happy to announce that the Jenkins community has moved all its official IRC channels to Libera chat. We have started our migration on May 26 as a response to the hostile takeover of hundreds of open source community channel by the new Freenode management. As decided by the Jenkins governance meeting on June 16th, Libera Chat IRC channels are the only official channels going forward.

What did we move?

We have created the following IRC chats:

that currently live on freenode to libera.chat:

Going forward, the Jenkins community does not have ANY official channels on Freenode. All channels are either removed or left abandoned. We no longer manage or control our channels. Most of the Jenkins IRC channel operators use IRCCloud, and hence they were banned by the Freenode team on June 11th. Only a few operators have reconnected since this event.

Taking the takeover of Freenode and hostile actions taken by the new management, we can no longer guarantee any of the following:

We have made backups of IRC channel conversations in the abandoned channels. If you need to access the conversation history, please reach out to the Jenkins Infrastructure team.

We thank the entire Libera Chat team and all contributors who have worked on creating a Freenode replacement for hundreds of open source communities using IRC. Within just a month, a new platform has been created and adopted by almost all active projects. We remember the Hudson to Jenkins renaming days when a similar mobilization happened in the Jenkins community, and we appreciate all the effort put by contributors.

Special thanks to Tim Jacomb, Gavin Mogan, Alex Earl, and Olivier Vernin for their work on the migration of IRC channels and our automation like the IRC Bot used by the Jenkins hosting team.

In the Jenkins community we will keep using Libera Chat IRC and maintaining user and contributor channels there. Other Jenkins chat channels like Gitter and Slack are unchanged. We intend to gradually replace many of those channels with community.jenkins.io. This is a new portal powered by Discourse. The service is sponsored by Civilized Discourse Construction Kit, Inc.. It is currently in preview, stay tuned for announcements. As always, we will appreciate any suggestions and feedback!