Implementing DevSecOps practices at the enterprise scale is challenging. With multiple programming languages, automated testing frameworks, and security compliance tools being used by different applications within your organization, it becomes difficult to build and maintain pipelines for each team.

Most pipelines are going to follow the same generic workflow regardless of which specific tech stack is employed by an application. The Templating Engine Plugin (abbreviated as JTE for Jenkins Templating Engine) allows you to capture this efficiency by creating tool-agnostic, templated workflows to be reused by every team.

As technology consultants with clients in both the public and private sectors, at Booz Allen we found ourselves building DevSecOps pipelines from scratch for every new project. Through developing the Jenkins Templating Engine, we’ve seen pipeline development decrease from months to days now that we can reuse tool integrations while bringing a new level of governance to Jenkins pipelines.

With the rise of microservice-based architectures, a centralized DevOps teams can support many different development teams simultaneously; all of whom may be leveraging different programming languages and automated testing tools.

While the tools may differ between development teams, the workflow is often the same: unit test, static code analysis, build and publish an artifact, deploy it, and then perform different types of testing against the deployed application.

Let’s walk through a bare bones example to demonstrate the reusability of templates:

Templates leverage Steps contributed by Libraries to outline a workflow teams must implement. While a template does get executed just like any other Jenkinsfile (meaning that the standard scripted and declarative syntax is supported), the goal of a template should be to read like plain English and avoid any technical implementation.

The steps outlined by this template (unit_test, build, and static_code_analysis) have been named generically on purpose. This way teams can specify different libraries to use while sharing the same pipeline.

Implementing a shareable pipeline with the Templating Engine requires a few key components:

A Pipeline Configuration Repository is used to store common configurations and pipeline templates inherited by teams.

This example Pipeline Configuration Repository will later be configured as part of a Governance Tier: the mechanism in JTE that allows you to build hierarchical configurations representing your organization.

When configuring the Governance Tier in Jenkins, you will provide a source code management location for a repository that contains the above components as well as the base directory where these artifacts can be found.

Next, we’ll create a Jenkinsfile for the Governance Tier. In JTE, the Jenkinsfile is the default pipeline template that an execution will use.

The Templating Engine Plugin has implemented a version of Jenkins Shared Libraries to enhance the reusability of libraries. A library is a root directory within a source code repository that has been configured as a Library Source on a Governance Tier.

In our example, the pipeline template needs to perform unit testing, package an artifact, and run static code analysis.

In this scenario, we should create gradle, maven, and sonarqube libraries.

Implementing a library step is exactly the same as just writing regular global variables as part of the default Jenkins Shared Libraries.

For the purposes of this demonstration, we will just have each step print out the step name and contributing library.

The configuration file for JTE is named pipeline_config.groovy.

These repositories both contain an application pipeline_config.groovy configuration file.

Now that we have a Pipeline Configuration Repository and a Library Source Repository, we can configure a Governance Tier in Jenkins: 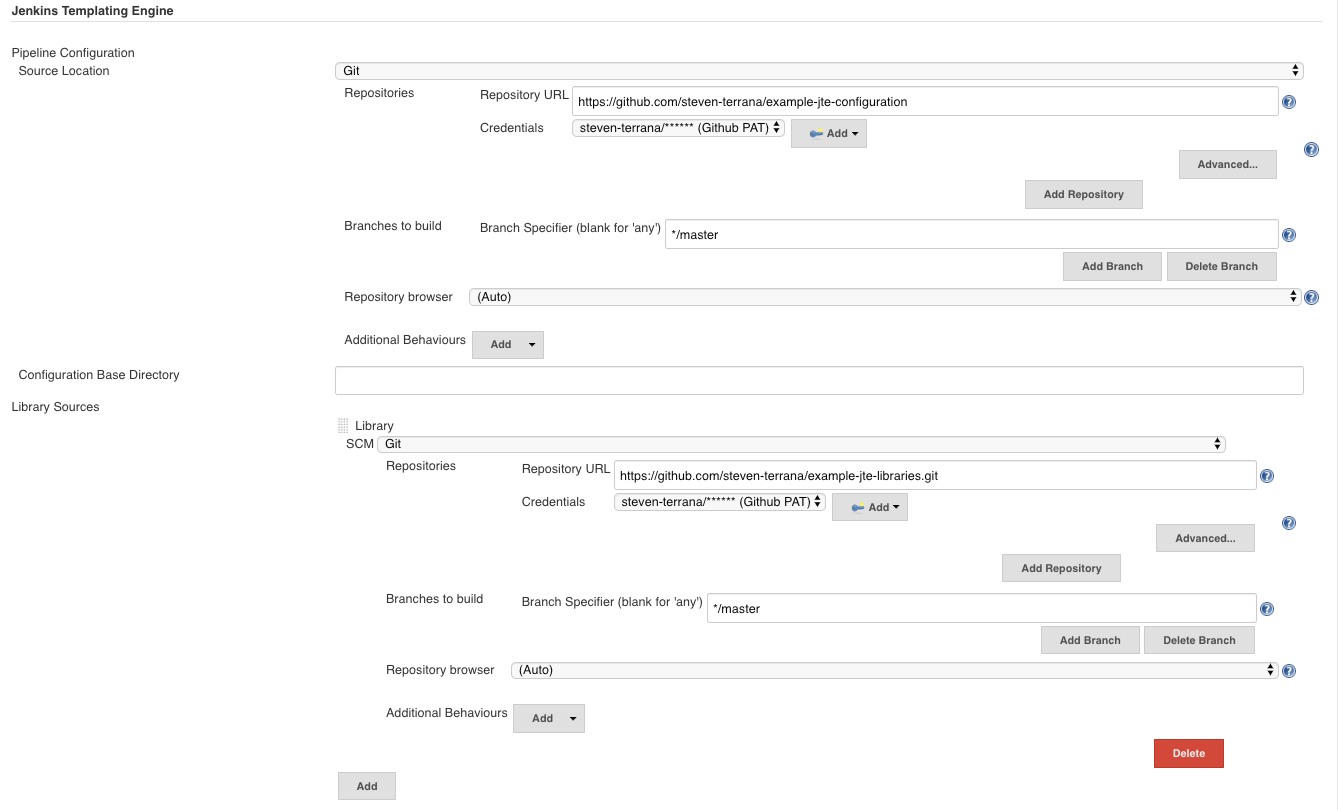 Step 7: Create a Multibranch Pipeline for Both Applications

That’s it! Now, both applications will leverage the exact same pipeline template while having the flexibility to select which tools should be used during each phase of the workflow.

Below is sample output from the console log from both applications pipeline runs:

Benefits of the Templating Engine

Leveraging the Templating Engine Plugin will allow you to define enterprise-scale, approved workflows that can be used by teams regardless of what tools are being used. This top-down approach makes scaling and enforcing DevSecOps principles significantly easier within your organization.

There’s really no need for every team in your organization to figure out how to do the same things over and over again. At Booz Allen, we have seen pipeline development time decrease from months to days as we have continuously reused and expanded upon our Templating Engine library portfolio as part of our Solutions Delivery Platform.

Often DevOps engineers find themselves building and supporting pipelines for multiple development teams at the same time. By decoupling the workflow from the technical implementation and consolidating the pipeline definition to a centralized location, the Templating Engine plugin allows DevOps engineers to scale much faster.

The Templating Engine Plugin has been open sourced and made available in the Jenkins Update Center.

We always appreciate feedback and contributions! If you have an interesting use case or would like to ask questions, try the templating-engine-plugin on Gitter.