Continuous Security for Rails apps with Pipeline and Brakeman

When the Ruby on Rails framework debuted it changed the industry in two noteworthy ways: it created a trend of opinionated web application frameworks (Django, Play, Grails) and it also strongly encouraged thousands of developers to embrace test-driven development along with many other modern best practices (source control, dependency management, etc). Because Ruby, the language underneath Rails, is interpreted instead of compiled there isn’t a "build" per se but rather tens, if not hundreds, of tests, linters and scans which are run to ensure the application’s quality. With the rise in popularity of Rails, the popularity of application hosting services with easy-to-use deployment tools like Heroku or Engine Yard rose too.

This combination of good test coverage and easily automated deployments makes Rails easy to continuously deliver with Jenkins. In this post we’ll cover testing non-trivial Rails applications with Jenkins Pipeline and, as an added bonus, we will add security scanning via Brakeman and the Brakeman plugin.

For this demonstration, I used Ruby Central's cfp-app:

A Ruby on Rails application that lets you manage your conference’s call for proposal (CFP), program and schedule. It was written by Ruby Central to run the CFPs for RailsConf and RubyConf.

I chose this Rails app, not only because it’s a sizable application with lots of tests, but it’s actually the application we used to collect talk proposals for the "Community Tracks" at this year’s Jenkins World. For the most part, cfp-app is a standard Rails application. It uses PostgreSQL for its database, RSpec for its tests and Ruby 2.3.x as its runtime.

For most Rails applications there are few, if any, changes needed to enable continuous delivery with Jenkins. In the case of cfp-app, I added two gems to get the most optimal integration into Jenkins:

Adding these was simple, I just needed to update the Gemfile and the Rakefile in the root of the repository to contain:

With the cfp-app project set up, next on the list is to ensure that Jenkins itself is ready. Generally I suggest running the latest LTS of Jenkins; for this demonstration I used Jenkins 2.7.1 with the following plugins:

I also used the GitHub Organization Folder plugin to automatically create pipeline items in my Jenkins instance; that isn’t required for the demo, but it’s pretty cool to see repositories and branches with a Jenkinsfile automatically show up in Jenkins, so I recommend it!

In addition to the plugins listed above, I also needed at least one Jenkins agent with the Docker daemon installed and running on it. I label these agents with "docker" to make it easier to assign Docker-based workloads to them in the future.

Any Linux-based machine with Docker installed will work, in my case I was provisioning on-demand agents with the Azure plugin which, like the EC2 plugin, helps keep my test costs down.

To make sense of the various things that the Jenkinsfile needs to do, I find it easier to start by simply defining the stages of my pipeline. This helps me think of, in broad terms, what order of operations my pipeline should have. For example:

As mentioned previously, this Jenkinsfile is going to rely heavily on the CloudBees Docker Pipeline plugin. The plugin provides two very important features:

Like most Rails applications, one can effectively test the application with two commands: bundle install followed by bundle exec rake. I already had some Docker images prepared with RVM and Ruby 2.3.0 installed, which ensures a common and consistent starting point:

Unfortunately, with this application, the bundle exec rake command will fail if PostgreSQL isn’t available when the process starts. This is where the second important feature of the CloudBees Docker Pipeline plugin comes into effect: the ability to run a container in the "background."

Combining these two snippets of Jenkins Pipeline is, in my opinion, where the power of the DSL shines: 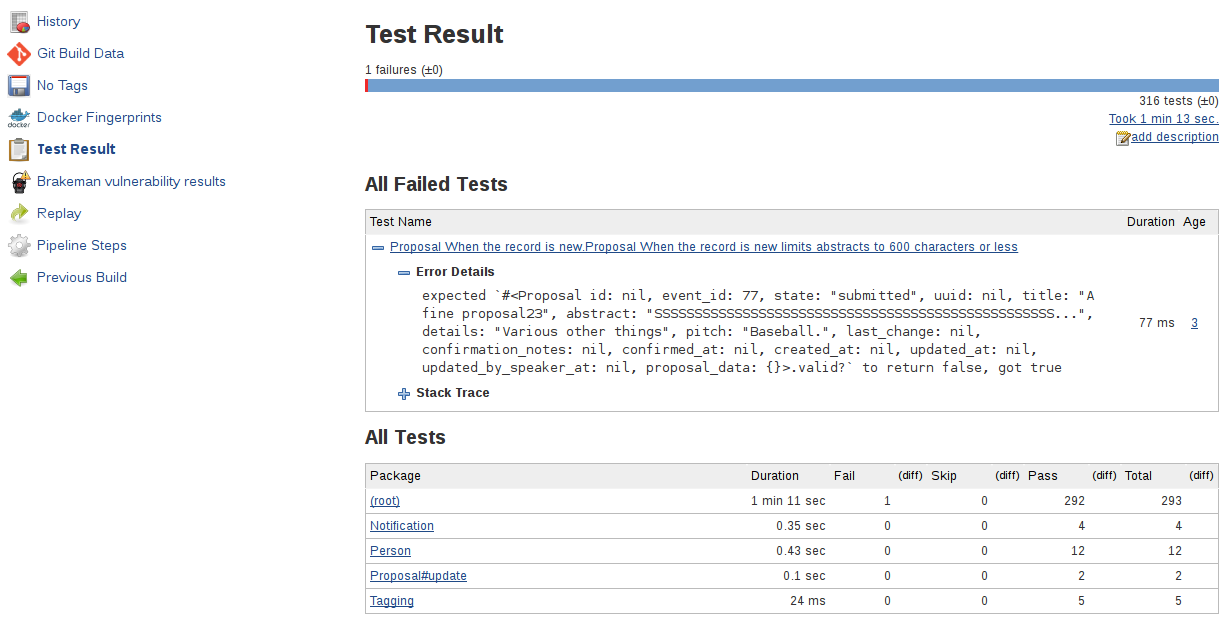 With this done, the basics are in place to consistently run the tests for cfp-app in fresh Docker containers for each execution of the pipeline.

Using Brakeman, the security scanner for Ruby on Rails, is almost trivially easy inside of Jenkins Pipeline, thanks to the Brakeman plugin which implements the publishBrakeman step.

Building off our example above, we can implement the "Security scan" stage:

Once the tests and security scanning are all working properly, we can start to set up the deployment stage. Jenkins Pipeline provides the variable currentBuild which we can use to determine whether our pipeline has been successful thus far or not. This allows us to add the logic to only deploy when everything is passing, as we would expect:

I have gratuitously commented the full Jenkinsfile which I hope is a useful summation of the work outlined above. Having worked on a number of Rails applications in the past, the consistency provided by Docker and Jenkins Pipeline above would have definitely improved those projects' delivery times. There is still room for improvement however, which is left as an exercise for the reader. Such as: preparing new containers with all their dependencies built-in instead of installing them at run-time. Or utilizing the parallel step for executing RSpec across multiple Jenkins agents simultaneously.

The beautiful thing about defining your continuous delivery, and continuous security, pipeline in code is that you can continue to iterate on it!