When using the standalone Jenkins server you don’t have to worry about multiple servers and nodes. However, the issue with this setup is that your server can become overloaded with numerous jobs running at the same time. There are ways to solve this problem by increasing the number of executors, but you soon end up hitting a performance limit.

To overcome this problem, you can offload some of the jobs to different machines called Jenkins agents.

Scalability is a measure that shows the ability of a system to expand its capabilities to handle additional load. One of the strongest sides of Jenkins is that it has a scaling feature out-of-the-box. Jenkins scaling is based on the controller/agents model, where you have a number of agent instances and one main Jenkins instance called the controller that is responsible mainly for distributing jobs across the agents. Jenkins agents run a small program that communicates with the Jenkins controller to check if there’s any job it can run. When Jenkins finds a job scheduled, it transfers the build to the agent.

Taking it a step further, running a container orchestrator such as Kubernetes, you can make Jenkins do smarter things. The Jenkins controller is responsible for the hosting configuration and the distribution of jobs to multiple agents. However, you don’t need the agents to be preexisting, they can be created on the fly, as in when they’re required.

Advantages of scaling Jenkins on Kubernetes

If your build or your agent gets corrupted, you no longer need to worry — Jenkins will remove the unhealthy instance and spin up a new one.

You no longer have to plan the executors and limit them; instead, Jenkins will spin up an agent instance and run your build in it.

Kubernetes manages loads well, and it’ll make sure your Jenkins agents spin up in the best available server, which makes your builds faster and more efficient.

Setting Up Scalable Jenkins on Kubernetes

To install a Jenkins controller, create your docker image based on the base Jenkins image, which can be found in the official docker repository (keep in mind that Docker should be installed on your local machine, see the installation steps here). For this, you need to create a dockerfile. Having your Jenkins setup as a dockerfile is highly recommended to make your continuous integration infrastructure replicable and have it ready for setup from scratch. So let’s create our first example dockerfile for the Jenkins controller:

You can install additional plugins just by adding similar commands inside your dockerfile like we did above. However, one of the plugins above is critical for installation. It is the Kubernetes plugin. This plugin is designed to implement Jenkins scaling on top of a Kubernetes cluster.

Next, we need to build the image that can be used and run inside the Kubernetes cluster later on.

This command doesn’t show any output after execution so if you didn’t get any errors then everything should be fine. To build a docker image based on the dockerfile you created, all you need is to run this command from the same folder where you have created the dockerfile:

After the build process is finished, let’s verify that the newly created image is there:

Congratulations! Your Jenkins controller image is created and can be used inside your Kubernetes cluster.

After successfully creating your Jenkins image, folllow the steps explained in the Jenkins installation doc to deploy your Jenkins controller.

To validate that creating the deployment was successful you can invoke:

To validate that creating the service was successful you can run:

So now we have created a deployment and service, how do we access our Jenkins controller?

From the output above we can see that the service has been exposed on port 32664. In addition to that, we need to know the IP of the Kubernetes cluster itself. We can get it by using this command:

Now it’s time to configure Jenkins agents. As you might remember, we installed the Kubernetes plugin using the controller dockerfile so we don’t need to install anything separately and the required plugin should be already there.

The Jenkins pod URL port is standard - 8080, and you can get IP address following the steps below. First, we need to get the Jenkins pod id, which is the value of the output provided by this command:

Second, we need to run the command that describes the pods passing the pod id as an argument. You will find the IP address in the output:

In addition to that, in the Kubernetes Pod Template section, we need to configure the image that will be used to spin up the agents. If you have some custom requirements for your agents, you can build one more dockerfile with the appropriate changes the same way we did for the Jenkins controller. On the other hand, if you don’t have unique requirements for your agents, you can use the default Jenkins agents image available on the official Docker hub repository. In the ‘Kubernetes Pod Template’ section you need to specify the following (the rest of the configuration is up to you):

Kubernetes Pod Template Name - can be any and will be shown as a prefix for unique generated agents' names, which will be run automatically during builds Docker image - the docker image name that will be used as a reference to spin up a new Jenkins agents. 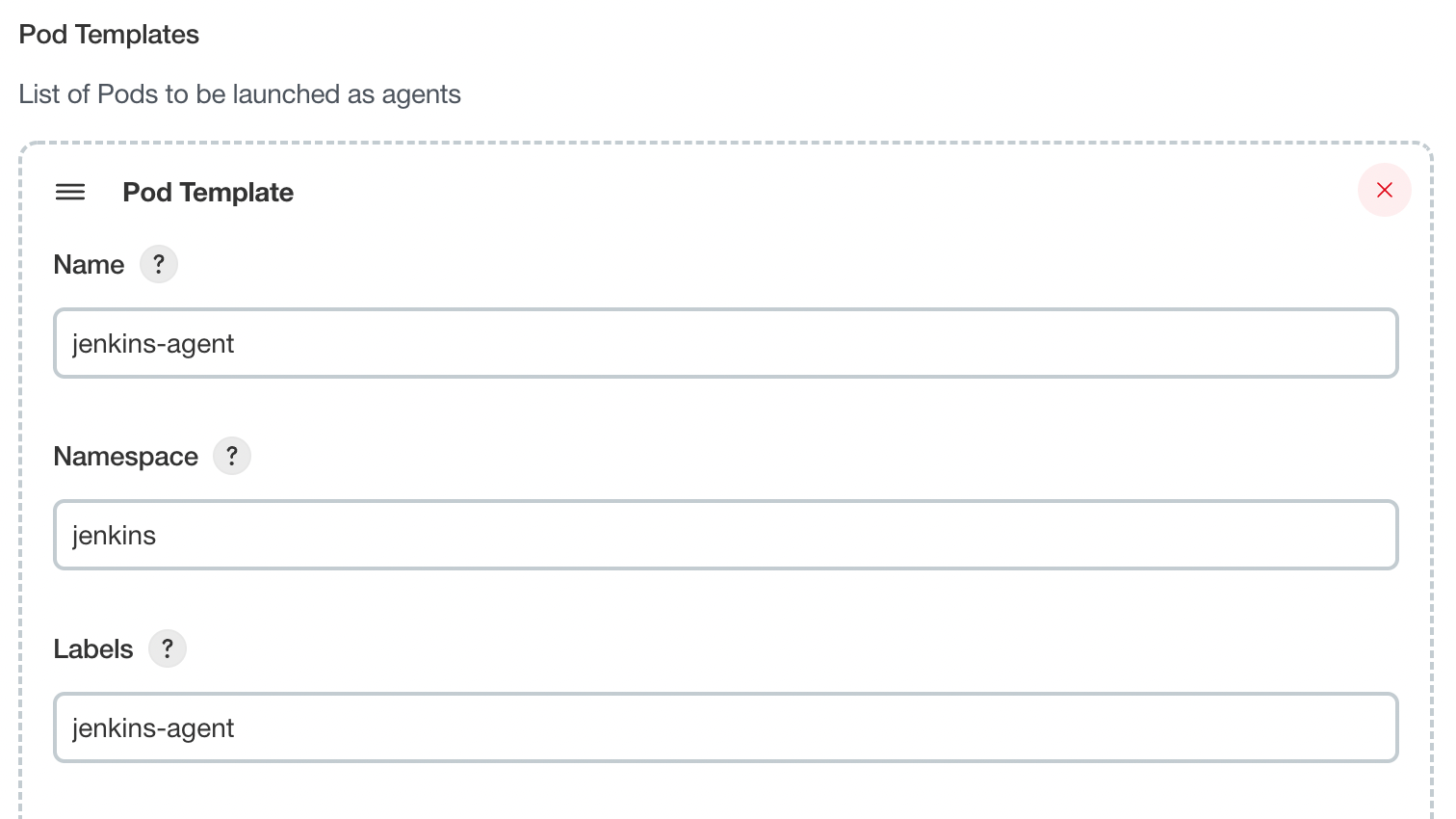 Now all the configuration seems to be in place and we are ready for some tests. Let’s create two different build plans. 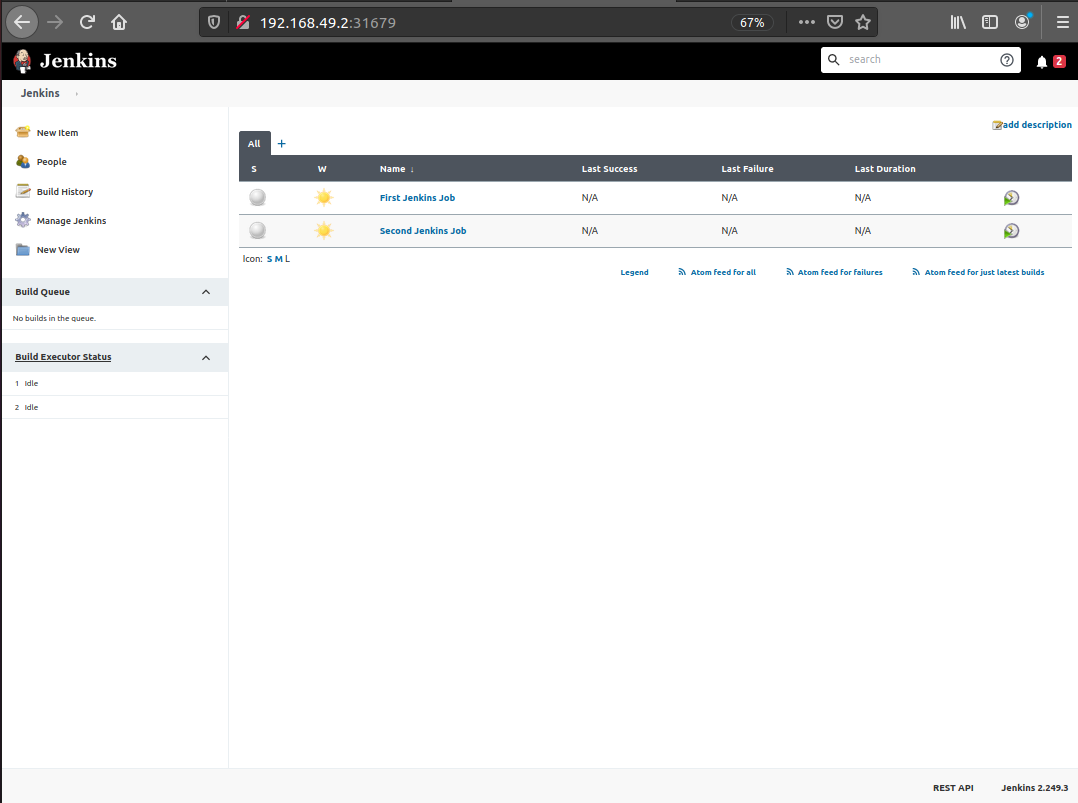 Now let’s trigger the execution for both of the builds. You should see that both build plans appear in the Build Queue box almost immediately.

If you applied the correct configuration in the previous steps, you should see that you have two additional executors and both have the prefix jenkins-agent, in about 10-15 seconds. This means that these nodes were automatically launched inside the Kubernetes cluster by using the Jenkins Kubernetes plugin, and, most importantly, that they were run in parallel. You can also confirm this from the Kubernetes dashboard, which will show you a couple of new pods. After both builds are completed, you should see that both build executors have been removed and are not available inside the cluster anymore.

Congratulations! We’ve successfully set up scalable Jenkins on top of a Kubernetes cluster.

Was this page helpful?

Please submit your feedback about this page through this quick form.

Alternatively, if you don't wish to complete the quick form, you can simply indicate if you found this page helpful?