Getting Started with Pipelines

This document is intended for novice users of the Jenkins pipeline feature. The document explains what a pipeline is, why that matters, and how to create the different kinds of pipelines.

While standard Jenkins “freestyle” jobs support simple continuous integration by allowing you to define sequential tasks in an application lifecycle, they do not create a persistent record of execution, enable one script to address all the steps in a complex workflow, or confer the other advantages of pipelines.

In contrast to freestyle jobs, pipelines enable you to define the whole application lifecycle. Pipeline functionality helps Jenkins to support continuous delivery (CD). The Pipeline plugin was built with requirements for a flexible, extensible, and script-based CD workflow capability in mind.

The flowchart below is an example of one continuous delivery scenario enabled by the Pipeline plugin:

Pipelines are Jenkins jobs enabled by the Pipeline (formerly called “workflow”) plugin and built with simple text scripts that use a Pipeline DSL (domain-specific language) based on the Groovy programming language.

Pipelines leverage the power of multiple steps to execute both simple and complex tasks according to parameters that you establish. Once created, pipelines can build code and orchestrate the work required to drive applications from commit to delivery.

Pipeline terms such as “step,” “node,” and “stage” are a subset of the vocabulary used for Jenkins in general.

A “step” (often called a “build step”) is a single task that is part of sequence. Steps tell Jenkins what to do.

In pipeline coding contexts, as opposed to Jenkins generally, a “node” is a step that does two things, typically by enlisting help from available executors on agents:

(In Jenkins generally, a “node” means any computer that is part of your Jenkins installation, whether that computer is used as a controller or as an agent).

A “stage” is a step that calls supported APIs. Pipeline syntax is comprised of stages. Each stage can have one or more build steps within it.

Familiarity with Jenkins terms such as “controller,” “agent”, and “executor” also helps with understanding how pipelines work. These terms are not specific to pipelines:

To run pipelines, you need to have a Jenkins instance that is set up with the appropriate plugins. This requires:

The Pipeline plugin is installed in the same way as other Jenkins plugins. Installing the Pipeline plugin also installs the suite of related plugins on which it depends: Open Jenkins in your web browser. On the Manage Jenkins page for your installation, navigate to Manage Plugins. Find Pipeline Plugin from among the plugins listed on the Available tab. (You can do this by scrolling through the plugin list or by using “Pipeline” as a term to filter results) Select the checkbox for Pipeline Plugin. Select either Install without restart or Download now and install after restart. Pipeline plugin installation automatically includes all necessary dependencies. Restart Jenkins.

The Pipeline plugin works with a suite of related plugins that enhance the pipeline functionality of your Jenkins setup. The additional plugins typically introduce additional pipeline syntax or visualizations.

Optional plugins are mainly useful if you are creating pipelines that are related to the technologies that they support.

Pipeline-related plugins other than those listed above are regularly “whitelisted” as compatible with or designed for Pipeline usage. For more information, see the Plugin Compatibility With Pipeline wiki. Current contents of that wiki are summarized in the following table:

Note: Several plugins available in the Jenkins ecosystem but not actually related to the Pipeline feature set described in this guide also use the terms "pipeline" or "DSL" in their names. For example:

As with any Jenkins plugin, you have the option of installing the Pipeline plugin from the Plugins web page at https://plugins.jenkins.io , but using the Plugin Manager interface is preferred because you do not then have to make allowances for plugin dependencies or compatibility issues. To investigate Pipeline without installing Jenkins separately or accessing your production system, you can run a Docker demo of Pipeline functionality.

You can create pipelines in either of the following ways:

To create a simple pipeline from the Jenkins interface, perform the following steps:

The following example shows a successful build of a pipeline created with a one-line script that uses the “echo” step to output the phrase, “hello from pipeline:”

Note: You can also create complex and multi-branch pipelines in the script entry area of the Jenkins configuration page, but because they contain multiple stages and the configuration page UI provides limited scripting space, pipeline creation is more commonly done using an editor of your choice from which scripts can be loaded into Jenkins using the Pipeline script from SCM option.

The Multibranch Pipeline project type enables you to configure different jobs for different branches of the same project. In a multi-branch pipeline configuration, Jenkins automatically discovers, manages, and executes jobs for multiple source repositories and branches. This eliminates the need for manual job creation and management, as would otherwise be necessary when, for example, a developer adds a new feature to an existing product. Multi-branch pipelines also enable you to stop or suspend jobs automatically if circumstances make that appropriate.

A multi-branch pipeline project always includes a Jenkinsfile in its repository root. Jenkins automatically creates a sub-project for each branch that it finds in a repository with a Jenkinsfile.

Multi-branch pipelines use the same version control as the rest of your software development process. This “pipeline as code” approach has the following advantages:

To create a Multi-branch Pipeline:

For example (again in Git), if you started with a master branch, and then wanted to experiment with some changes, and so did git checkout -b newfeature and pushed some commits, Jenkins would automatically detect the new branch in your repository and create a new sub-project for it. That sub-project would have its own build history unrelated to the trunk (main line).

If you choose, you can ask for the sub-project to be automatically removed after its branch is merged with the main line and deleted. To change your Pipeline script—for example, to add a new Jenkins publisher step corresponding to new reports that your Makefile/pom.xml/etc. is creating—you edit the Jenkinsfile in your change. Your Pipeline script is always synchronized with the rest of the source code you are working on: the checkout scm command checks out the same revision as the script is loaded from.

Because Pipelines are comprised of text scripts, they can be written (edited) in the same script creation area of the Jenkins user interface where you create them:

Note: Pipeline script writing adds stages and steps to a pipeline; it does not convert one pipeline type into another. You determine which kind of pipeline you want to set up before writing it.

You can automate much of the pipeline configuration process by using the Snippet Generator tool.

Snippet Generator is dynamically populated with a list of the steps available for pipeline configuration. Depending on the plugins installed to your Jenkins environment, you may see more or fewer items in the list exposed by Snippet Generator.

To add one or more steps from Snippet Generator to your pipeline code: 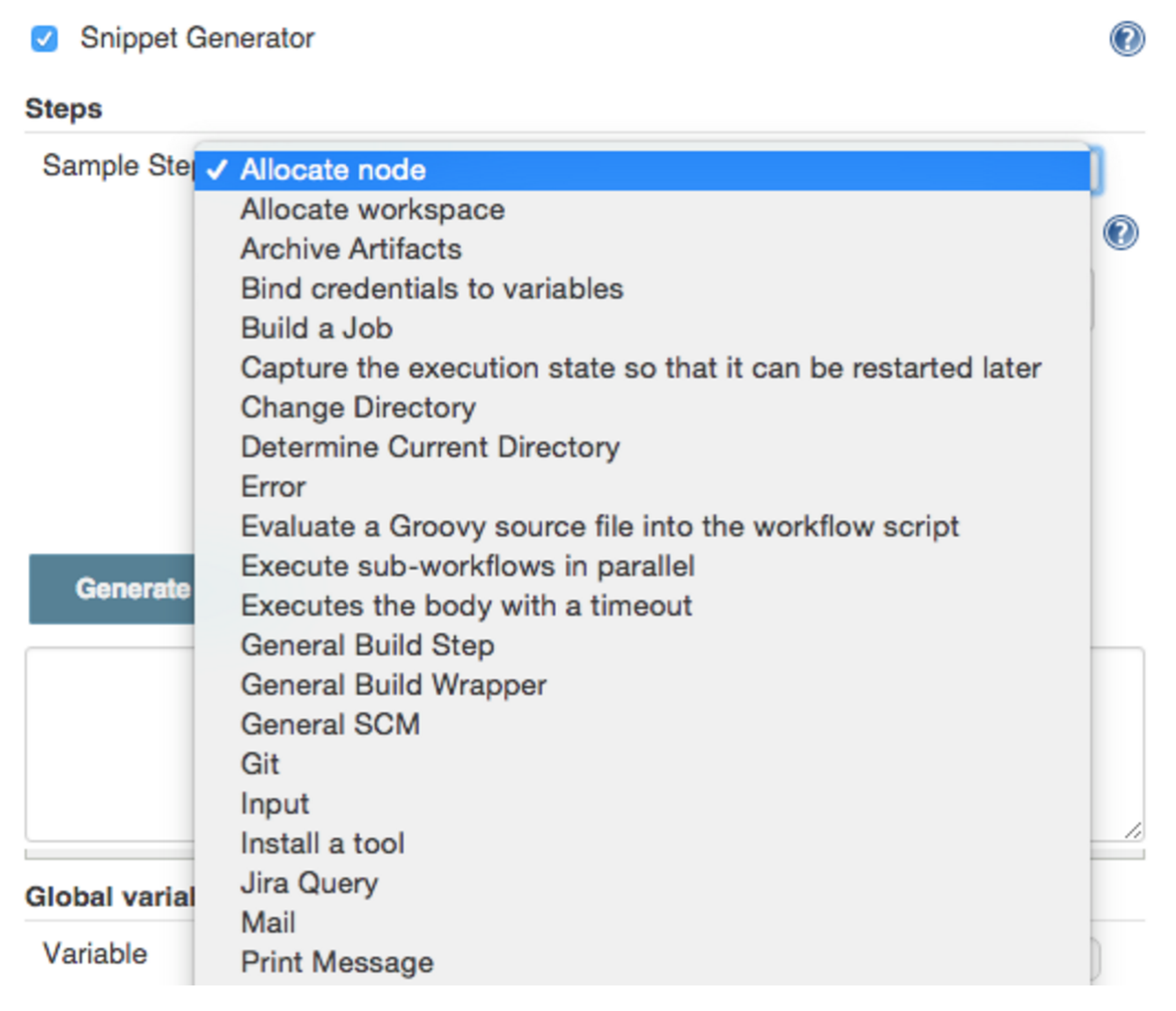 When you click Generate Groovy after selecting a step, you see the function name used for that step, the names of any parameters it takes (if they are not default parameters), and the syntax used by Snippet Generator to create that step.

You can copy and paste the generated code right into your Pipeline, or use it as a starting point, perhaps deleting any optional parameters that you do not need.

You typically add functionality to a new pipeline by performing the following tasks:

To configure a pipeline you have created through the Jenkins UI, select the pipeline and click Configure.

If you run Jenkins on Linux or another Unix-like operating system with a Git repository that you want to test, for example, you can do that with syntax like the following, substituting your own name for “joe-user”:

In Windows environments, use “bat” in place of “sh,” and use backslashes as the file separator where needed (backslashes need to be escaped inside strings).

For example, rather than:

Your Groovy pipeline script can include functions, conditional tests, loops, try/catch/finally blocks, and so on.

Sample syntax for one node in a Java environment that is using the open source Maven build automation tool (hence the definition for “mvnHome”) is shown below:

The tool step makes sure a tool with the given name is installed on the current node. The script needs to know where it was installed, so the tool can be run later. For this, you need a variable.

The def keyword in Groovy is the quickest way to define a new variable (with no specific type).

In the sample syntax discussed above, a variable is defined by the following expression:

This ensures that M3 is installed somewhere accessible to Jenkins and assigns the return value of the step (an installation path) to the mvnHome variable.

Groovy lets you omit parentheses around function arguments. The named-parameter syntax is also a shorthand for creating a map, which in Groovy uses the syntax [key1: value1, key2: value2], so you could write:

For convenience, when calling steps taking only one parameter (or only one mandatory parameter) you can omit the parameter name. For example:

is really shorthand for:

One way to use tools by default is to add them to your executable path using the special variable env that is defined for all pipelines:

Setting a variable such as PATH in this way is only safe if you are using a single agent for this build. As an alternative, you can use the withEnv step to set a variable within a scope:

If you configured your pipeline to accept parameters using the Build with Parameters option, those parameters are accessible as Groovy variables of the same name.

If there are any test failures in a given build, you want Jenkins to record them, and then proceed, rather than stopping. If you want it saved, you must capture the JAR that you built. The following sample code for a node shows how (As previously seen in several examples from this guide, Maven is being used as a build tool):

Complex pipelines would be cumbersome to write and maintain if you could only do that in the text area provided by the Jenkins job configuration page.

Accordingly, you also have the option of writing pipeline scripts in in your IDE (integrated development environment) or SCM system, and then loading those scripts into Jenkins using the Pipeline Script from SCM option enabled by the workflow-scm-step plugin, which is one of the plugins that the Pipeline plugin depends on and automatically installs.

Loading pipeline scripts from another source leverages the idea of “pipeline as code,” and lets you maintain that source using version control and standalone Groovy editors.

To do this, select Pipeline script from SCM when defining the pipeline.

With the Pipeline script from SCM option selected, you do not enter any Groovy code in the Jenkins UI; you just indicate by specifying a path where in source code you want to retrieve the pipeline from. When you update the designated repository, a new build will be triggered, as long as your job is configured with an SCM polling trigger.

Multibranch Pipeline projects expose the name of the branch being built with the BRANCH_NAME environment variable. They also provide a special checkout scm Pipeline command, which checks out the specific commit that the Jenkinsfile originated, so that branch integrity is automatically maintained.