Pipeline as Code describes a set of features that allow Jenkins users to define pipelined job processes with code, stored and versioned in a source repository. These features allow Jenkins to discover, manage, and run jobs for multiple source repositories and branches — eliminating the need for manual job creation and management.

To use Pipeline as Code, projects must contain a file named Jenkinsfile in the repository root, which contains a "Pipeline script."

Additionally, one of the enabling jobs needs to be configured in Jenkins:

Fundamentally, an organization’s repositories can be viewed as a hierarchy, where each repository may have child elements of branches and pull requests.

Presence of the Jenkinsfile in the root of a repository makes it eligible for Jenkins to automatically manage and execute jobs based on repository branches.

The Jenkinsfile should contain a Pipeline script, specifying the steps to execute the job. The script has all the power of Pipeline available, from something as simple as invoking a Maven builder, to a series of interdependent steps, which have coordinated parallel execution with deployment and validation phases.

Folder computation may happen automatically via webhook callbacks, as branches and repositories are created or removed. Computation may also be triggered by the Build Trigger defined in the configuration, which will automatically run a computation task after a period of inactivity (this defaults to run after one day).

Information about the last execution of the folder computation is available in the Folder Computation section.

The log from the last attempt to compute the folder is available from this page. If folder computation doesn’t result in an expected set of repositories, the log may have useful information to diagnose the problem.

Both Multibranch Pipeline projects and Organization Folders have configuration options to allow precise selection of repositories. These features also allow selection of two types of credentials to use when connecting to the remote systems:

Multibranch Pipeline projects are one of the fundamental enabling features for Pipeline as Code. Changes to the build or deployment procedure can evolve with project requirements and the job always reflects the current state of the project. It also allows you to configure different jobs for different branches of the same project, or to forgo a job if appropriate. The Jenkinsfile in the root directory of a branch or pull request identifies a multibranch project.

Other options available to Multibranch Pipeline projects are:

After configuring these items and saving the configuration, Jenkins will automatically scan the repository and import appropriate branches.

Organization Folders offer a convenient way to allow Jenkins to automatically manage which repositories are automatically included in Jenkins. Particularly, if your organization utilizes GitHub Organizations or Bitbucket Teams, any time a developer creates a new repository with a Jenkinsfile, Jenkins will automatically detect it and create a Multibranch Pipeline project for it. This alleviates the need for administrators or developers to manually create projects for these new repositories.

Other options available are:

After configuring these items and saving the configuration, Jenkins will automatically scan the organization and import appropriate repositories and resulting branches.

Computed folders can remove items immediately or leave them based on a desired retention strategy. By default, items will be removed as soon as the folder computation determines they are no longer present. If your organization requires these items remain available for a longer period of time, simply configure the Orphaned Item Strategy appropriately. It may be useful to keep items in order to examine build results of a branch after it’s been removed, for example.

You may also configure an icon to use for the folder display. For example, it might be useful to display an aggregate health of the child builds. Alternately, you might reference the same icon you use in your GitHub organization account.

To demonstrate using an Organization Folder to manage repositories, we’ll use the fictitious organization: CloudBeers, Inc..

Optionally, enter a better descriptive name for the Description, such as 'CloudBeers GitHub'. In the Repository Sources section, complete the section for "GitHub Organization". Make sure the owner matches the GitHub Organization name exactly, in our case it must be: cloudbeers. This defaults to the same value that was entered for the item name in the first step. Next, select or add new "Scan credentials" - we’ll enter our GitHub username and access token as the password.

After saving, the "Folder Computation" will run to scan for eligible repositories, followed by multibranch builds. 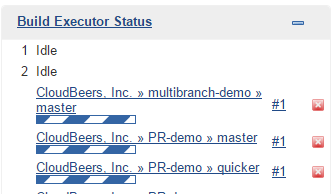 Refresh the page after the job runs to ensure the view of repositories has been updated. 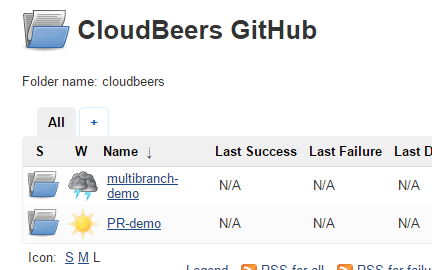 A this point, you’re finished with basic project configuration and can now explore your imported repositories. You can also investigate the results of the jobs run as part of the initial Folder Computation. 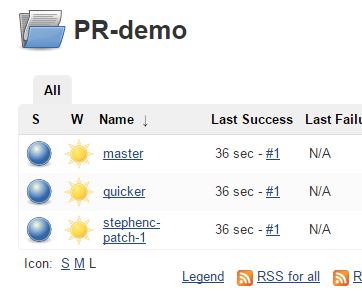 Jenkins is the Swiss army knife in the software delivery toolchain. Developers and operations (DevOps) personnel have different mindsets and use different tools to get their respective jobs done. Since Jenkins integrates with a huge variety of toolsets, it serves as the intersection point between development and operations teams.

Many organizations have been orchestrating pipelines with existing Jenkins plugins for several years. As their automation sophistication and their own Jenkins experience increases, organizations inevitably want to move beyond simple pipelines and create complex flows specific to their delivery process.

These Jenkins users require a feature that treats complex pipelines as a first-class object, and so the Pipeline plugin was developed .

Continuous delivery is a process - rather than a tool - and requires a mindset and culture that must percolate from the top-down within an organization. Once the organization has bought into the philosophy, the next and most difficult part is mapping the flow of software as it makes its way from development to production.

The root of such a pipeline will always be an orchestration tool like a Jenkins, but there are some key requirements that such an integral part of the pipeline must satisfy before it can be tasked with enterprise-critical processes:

To ensure a tool can scale with an organization and suitably automate existing delivery pipelines without changing them, the tool should also support:

The Pipeline plugin allows users to create such a pipeline through a new job type called Pipeline. The flow definition is captured in a Groovy script, thus adding control flow capabilities such as loops, forks and retries. Pipeline allows for stages with the option to set concurrencies, preventing multiple builds of the same pipeline from trying to access the same resource at the same time.

There is just one job to capture the entire software delivery pipeline in an organization. Of course, you can still connect two Pipeline job types together if you want. A Pipeline job type uses a Groovy-based DSL for job definitions. The DSL affords the advantage of defining jobs programmatically:

Intra-organizational (or conceptual) boundaries are captured through a primitive called "stages." A deployment pipeline consists of various stages, where each subsequent stage builds on the previous one. The idea is to spend as few resources as possible early in the pipeline and find obvious issues, rather than spend a lot of computing resources for something that is ultimately discovered to be broken.

Pipeline provides this functionality by enhancing the stage primitive. For example, a stage can have a concurrency level of one defined to indicate that at any point only one thread should be running through the stage. This achieves the desired state of running a deployment as fast as it should run.

Continuous delivery means having binaries in a release ready state whereas continuous deployment means pushing the binaries to production - or automated deployments. Although continuous deployment is a sexy term and a desired state, in reality organizations still want a human to give the final approval before bits are pushed to production. This is captured through the "input" primitive in Pipeline. The input step can wait indefinitely for a human to intervene.

Deployment of Artifacts to Staging/Production

Deployment of binaries is the last mile in a pipeline. The numerous servers employed within the organization and available in the market make it difficult to employ a uniform deployment step. Today, these are solved by third-party deployer products whose job it is to focus on deployment of a particular stack to a data center. Teams can also write their own extensions to hook into the Pipeline job type and make the deployment easier.

Meanwhile, job creators can write a plain old Groovy function to define any custom steps that can deploy (or undeploy) artifacts from production.

All Pipelines are resumable, so if Jenkins needs to be restarted while a flow is running, it should resume at the same point in its execution after Jenkins starts back up. Similarly, if a flow is running a lengthy sh or bat step when an agent unexpectedly disconnects, no progress should be lost when connectivity is restored.

There are some cases when a flow build will have done a great deal of work and proceeded to a point where a transient error occurred: one which does not reflect the inputs to this build, such as source code changes. For example, after completing a lengthy build and test of a software component, final deployment to a server might fail because of network problems.

When you have complex builds pipelines, it is useful to see the progress of each stage and to see where build failures are occurring in the pipeline. This can enable users to debug which tests are failing at which stage or if there are other problems in their pipeline. Many organization also want to make their pipelines user-friendly for non-developers without having to develop a homegrown UI, which can prove to be a lengthy and ongoing development effort.

The Pipeline Stage View feature offers extended visualization of Pipeline build history on the index page of a flow project. This visualization also includes helpful metrics like average run time by stage and by build, and a user-friendly interface for interacting with input steps. 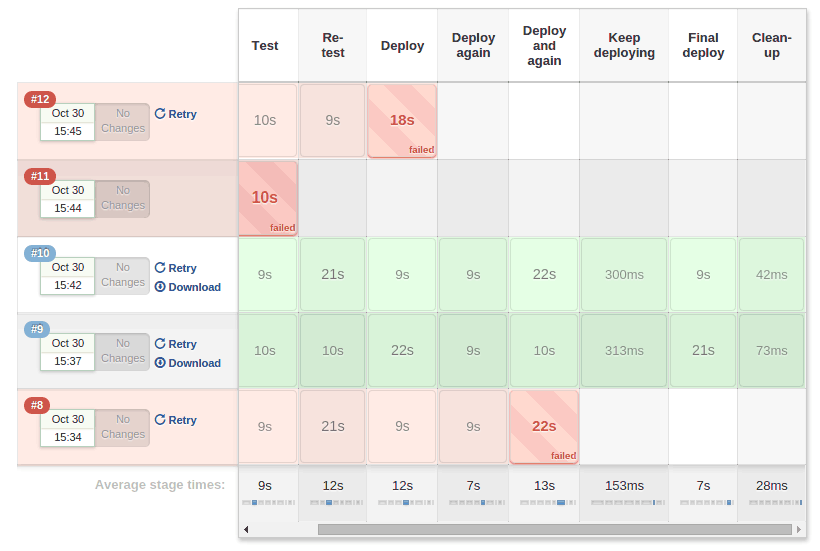 The only prerequisite for this plugin is a pipeline with defined stages in the flow. There can be as many stages as you desired and they can be in a linear sequence, and the stage names will be displayed as columns in the Stage View interface.

Artifact traceability and with fingerprints

Traceability is important for DevOps teams who need to be able to trace code from commit to deployment. It enables impact analysis by showing relationships between artifacts and allows for visibility into the full lifecycle of an artifact, from its code repository to where the artifact is eventually deployed in production.

Jenkins and the Pipeline feature support tracking versions of artifacts using file fingerprinting, which allows users to trace which downstream builds are using any given artifact. To fingerprint with Pipeline, simply add a "fingerprint: true" argument to any artifact archiving step. For example:

will archive any WAR artifacts created in the Pipeline and fingerprint them for traceability. This trace log of this artifact and a list of all fingerprinted artifacts in a build will then be available in the left-hand menu of Jenkins:

To find where an artifact is used and deployed to, simply follow the "more details" link through the artifact’s name and view the entries for the artifact in its "Usage" list.

Figure 3. Fingerprint of a WAR

For more information, visit the fingerprint documentation to learn more about how fingerprints work.