Continuous Integration for C/C++ Projects with Jenkins and Conan

C and C++ are present in very important industries today, including Operating Systems, embedded systems, finances, research, automotive, robotics, gaming, and many more. The main reason for this is performance, which is critical to many of these industries, and cannot be compared to any other technology. As a counterpart, the C/C++ ecosystem has a few important challenges to face:

Conan was born to mitigate these pains.

Conan uses python recipes, describing how to build a library by explicitly calling any build system, and also describing the needed information for the consumers (include directories, library names etc.). To manage the different configurations and the ABI compatibility, Conan uses "settings" (os, architecture, compiler…). When a setting is changed, Conan generates a different binary version for the same library: 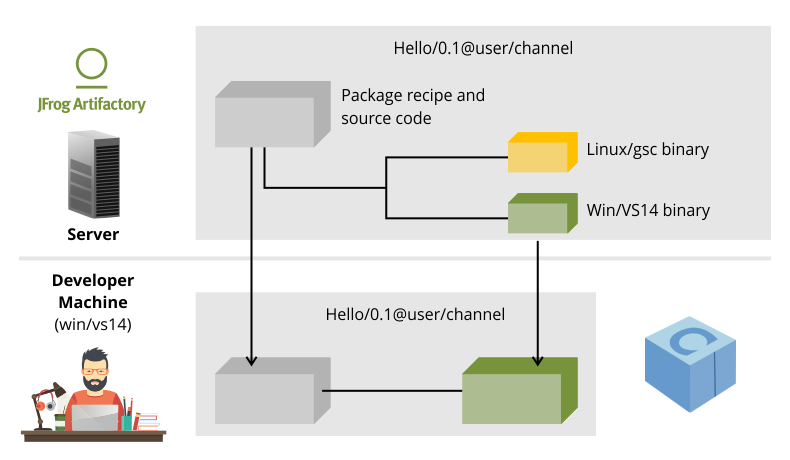 The built binaries can be uploaded to JFrog Artifactory or Bintray, to be shared with your team or the whole community. The developers in your team won’t need to rebuild the libraries again, Conan will fetch only the needed Binary packages matching the user’s configuration from the configured remotes (distributed model). But there are still some more challenges to solve:

The Conan ecosystem is growing fast, and DevOps with C/C++ is now a reality: 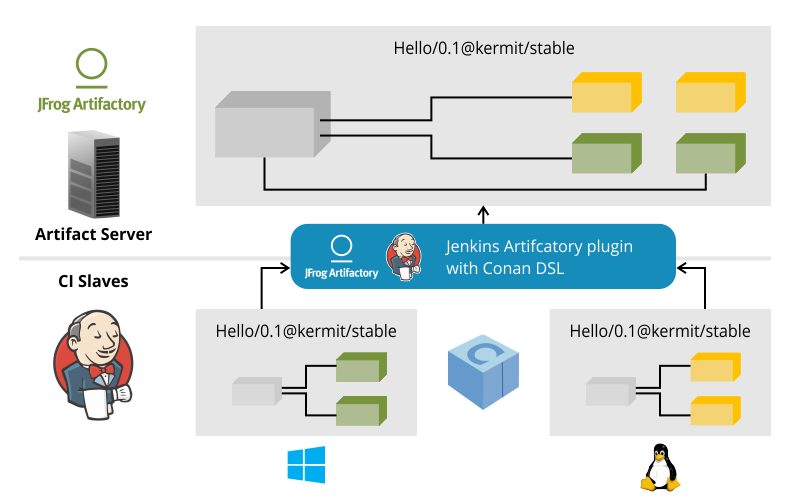 You can see in the above example that the Conan DSL is very explicit. It helps a lot with common operations, but also allows powerful and custom integrations. This is very important for C/C++ projects, because every company has a very specific project structure, custom integrations etc.

As we saw at the beginning of this blog post, it’s crucial to save time when building a C/C++ project. Here are several ways to optimize the process: 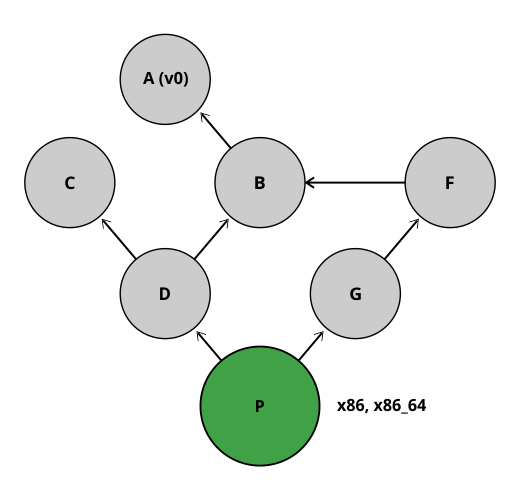 The above graph represents our project P and its dependencies (A-G). We want to distribute the project for two different architectures, x86 and x86_64.

What happens if we change library A?

If we bump the version to A(v1) there is no problem, we can update the B requirement and also bump its version to B(v1) and so on. The complete flow would be as follows:

But if we are developing our libraries in a development repository, we probably depend on the latest A version or will override A (v0) packages on every git push, and we want to automatically rebuild the affected libraries in this case B, D, F, G and P.

How we can do this with Jenkins Pipelines?

First we need to know which libraries need to be rebuilt. The "conan info --build_order" command identifies the libraries that were changed in our project, and also tells us which can be rebuilt in parallel.

We also have a repository with a configuration yml. The Jenkins tasks will use it to know where the recipe of each library is, and the different profiles to be used. In this case they are x86 and x86_64.

If we change and push library A to the repository, the "MultiBuild" task will be triggered. It will start by checking which libraries need to be rebuilt, using the "conan info" command. Conan will return something like this: [B, [D, F], G]

This means that we need to start building B, then we can build D and F in parallel, and finally build G. Note that library C does not need to be rebuilt, because it’s not affected by a change in library A.

The "MultiBuild" Jenkins pipeline script will create closures with the parallelized calls to the "SimpleBuild" task, and finally launch the groups in parallel.

Eventually, this is what will happen:

We can configure the "SimpleBuild" task within different nodes (Windows, OSX, Linux…), and control the number of executors available in our Jenkins configuration.

Embracing DevOps for C/C++ is still marked as a to-do for many companies. It requires a big investment of time but can save huge amounts of time in the development and releasing life cycle for the long run. Moreover it increases the quality and the reliability of the C/C++ products. Very soon, adoption of DevOps for C/C++ companies will be a must!

The Jenkins example shown above that demonstrating how to control the library building in parallel is just Groovy code and a custom convenient yml file. The great thing about it is not the example or the code itself. The great thing is the possibility of defining your own pipeline scripts to adapt to your specific workflows, thanks to Jenkins Pipeline, Conan and JFrog Artifactory.