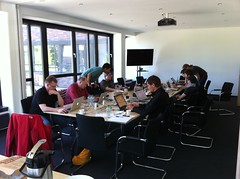 Thanks to the kindness of BigPoint GmbH and Kutzi, we had the first Jenkins Hackathon in Europe, in a very large and airly conference room in their Hamburg campus, on a nice sunny Sunday of May 1st. About 10 people came, including the static code analysis plugin fame Ullrich Hafner, Androd emulator plugin fame Christopher Orr, the instant messenger plugin (and others) fame Christoph Kutzinski. Some of us came from pretty far away places like Munich, Bonn, and Netherland. There was a good mix of existing developers and new developers, too.

During the hackathon, new folks developed whopping three plugins — a security realm that connects to Kerberos (password entering kind, not SSO), a plugin that adds a list view column to show where the last build was done, and another plugin that attempts to collect small list view column implmentations. German translations were improved, automated installation of Android SDKs are discussed and its implementation strategies explained. I've done my share of contribution by working on XStream support for JRuby, which is one of the ground work necessary for JRuby-based Jenkins plugin development, and I also showed the prototype Groovy-based templating that can potentially supercede Jelly. There were additional exchange of tips and tricks, how you do this and that.

Strong coffee and engaged conversations kept me awake all day, although German keyboard layout (on top of usual IDE difference + Mac/PC difference) made it hard to code on other people's computers, but all in all it was a very productive hackathon. In fact, the best ever. We wrapped up around 7pm and headed to a seafood restaurant near Elbe river, stayed there until 11pm-ish.

The next hackathon is planned in Paris toward the end of the month. I'm looking forward to another productive Hackathon, so if you are nearby, please RSVP and join us.
About the Author