A recurring security issue in Jenkins plugins is a lack of cross-site request forgery (CSRF) protection on form submission endpoints.

A security hardening in Jenkins 2.277.2 and 2.287 addresses some of these issues by causing structured form submission (calls to StaplerRequest#getSubmittedForm) to fail unless the HTTP verb of the request is POST (a requirement for CSRF protection to be effective). This will prevent GET requests from being able to submit a JSON form submission (commonly used in Jenkins) as ?form query parameter.

This additional safeguard can be configured by setting the Java system property org.kohsuke.stapler.RequestImpl.ALLOWED_HTTP_VERBS_FOR_FORMS. It accepts a comma-separated list of HTTP verbs of requests allowed to provide structured form submission. The default value is POST. Setting this system property to GET,POST would also allow GET requests to provide structured form submissions. Doing so is discouraged. Affected components should instead explicitly require POST requests by annotating web methods using @POST and configure HTML forms they provide to use <form … method="POST">, and clients should submit POST requests.

The transition from HTML <table> layout to HTML <div> layout in configuration forms requires changes in some plugins for compatibility. Jenkins administrators should update the installed plugins when they upgrade to Jenkins 2.277.1. Some older plugin releases will cause the Jenkins "Configure System" page to fail to save. Other older plugin releases will report Java runtime exceptions until they are updated to the most recent release.

Use the Plugin Manager to update plugins affected by configuration form modernization immediately after upgrading to Jenkins 2.277.1.

If you are experiencing configuration form problems (e.g., form controls not working, the save button not working, etc.) after updating plugins:

Installation Wizard may show up on startup (JENKINS-65149)

Jenkins 2.277.1 removes the Upgrade Wizard that was no longer operational after Jenkins 2.0 (pull request). It led to regression for instances created before 2.4 / 2.7.1 LTS. For such, Jenkins 2.277.1 will show the Setup Wizard on first startup. The regression is tracked as JENKINS-65149.

Workaround: When the setup wizard shows up, click the Select plugins to install option, then select None in the opened Windows, and then click "Install" button. It will effectively skip the Installation Wizard. It will not appear again after the restart, because Jenkins will create the required state file in the JENKINS_HOME directory. 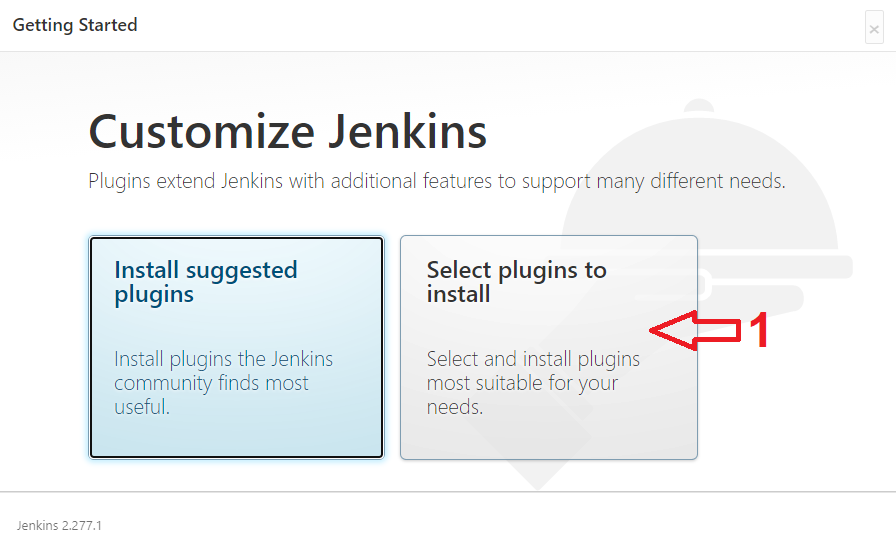 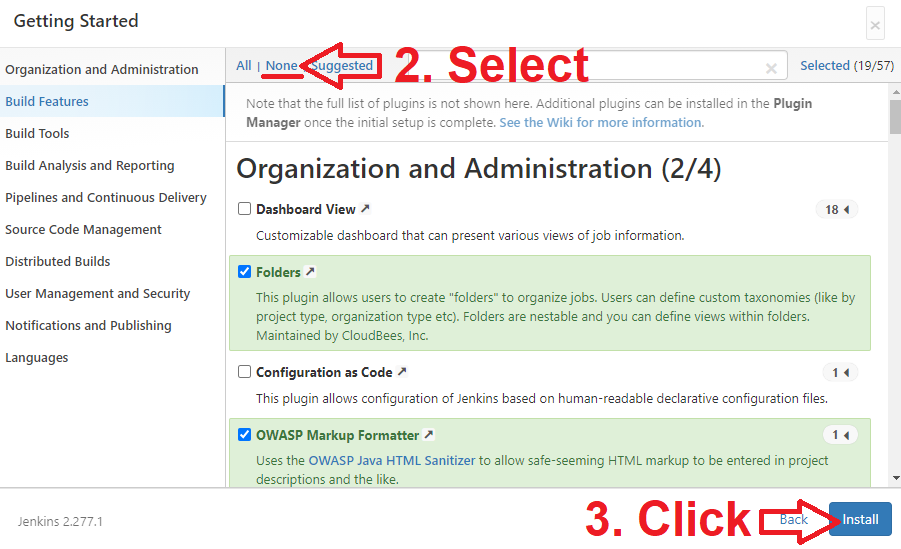 Jenkins 2.277.1 has replaced the outdated Acegi Security library with the Spring Security library. The most popular plugins have already been updated as necessary to support the change. Some older plugin releases may report NoClassDefFoundError for obsolete types defined in Acegi Security. Other older plugin releases will report Java runtime exceptions like NoSuchMethodError or AccessDeniedException2 until they are updated to the most recent release. Refer to the Spring Security compatibility table for questions related to specific plugins.

Use the Plugin Manager to update plugins affected by the Spring Security update before upgrading to Jenkins 2.277.1.

Jenkins 2.277.1 has replaced its outdated fork of the XStream XML serialization library with a recent release of the official XStream library. The most popular plugins have already been updated as necessary to support the change. Some older plugin releases may report NoSuchMethodError. Other older plugin releases may fail to interpret existing settings or may write their settings in a different format than was used before the XStream update. Refer to the XStream compatibility table for questions related to specific plugins.

Use the Plugin Manager to update plugins affected by the XStream update before upgrading to Jenkins 2.277.1.

Jenkins 2.277.1 updates the ASM Java bytecode manipulation and analysis framework that is used for bytecode processing in many plugins. This update affects plugins that depend on ASM for bytecode processing. Some older plugin releases may report a RuntimeException with the message "Error creating extended parser class" (like Token Macro plugin). Other older plugin releases may fail to interpret existing settings (like Email Extension plugin).

Use the Plugin Manager to update plugins affected by the ASM update after upgrading to Jenkins 2.277.1.

In very rare cases, this could result in problems when attempting to install plugins compatible with Jenkins (then Hudson) before 1.340. If you use a plugin that relies on the functionality provided by the CVS plugin and manage plugins outside the Jenkins plugin manager, you will now need to ensure yourself that a recent release of the CVS plugin is installed. Jenkins will attempt to load such plugins but may fail at any time during startup or afterwards with ClassNotFoundException or similar. In those cases, the best path forward is usually to modify the plugin that has the problem so that it requires a newer version of Jenkins core.

This release drops support for passwords that were stored with Jenkins versions prior to 2013. Passwords created with Jenkins prior to the September 2012 introduction of bcrypt based password hashing will need to change their password before the upgrade. If the upgrade has already been completed, then an administrator can login and change the password of the affected users with "Manage Users" from the "Manage Jenkins" page. If no administrator user is available after the upgrade, please refer to Disable Access Control for alternatives.