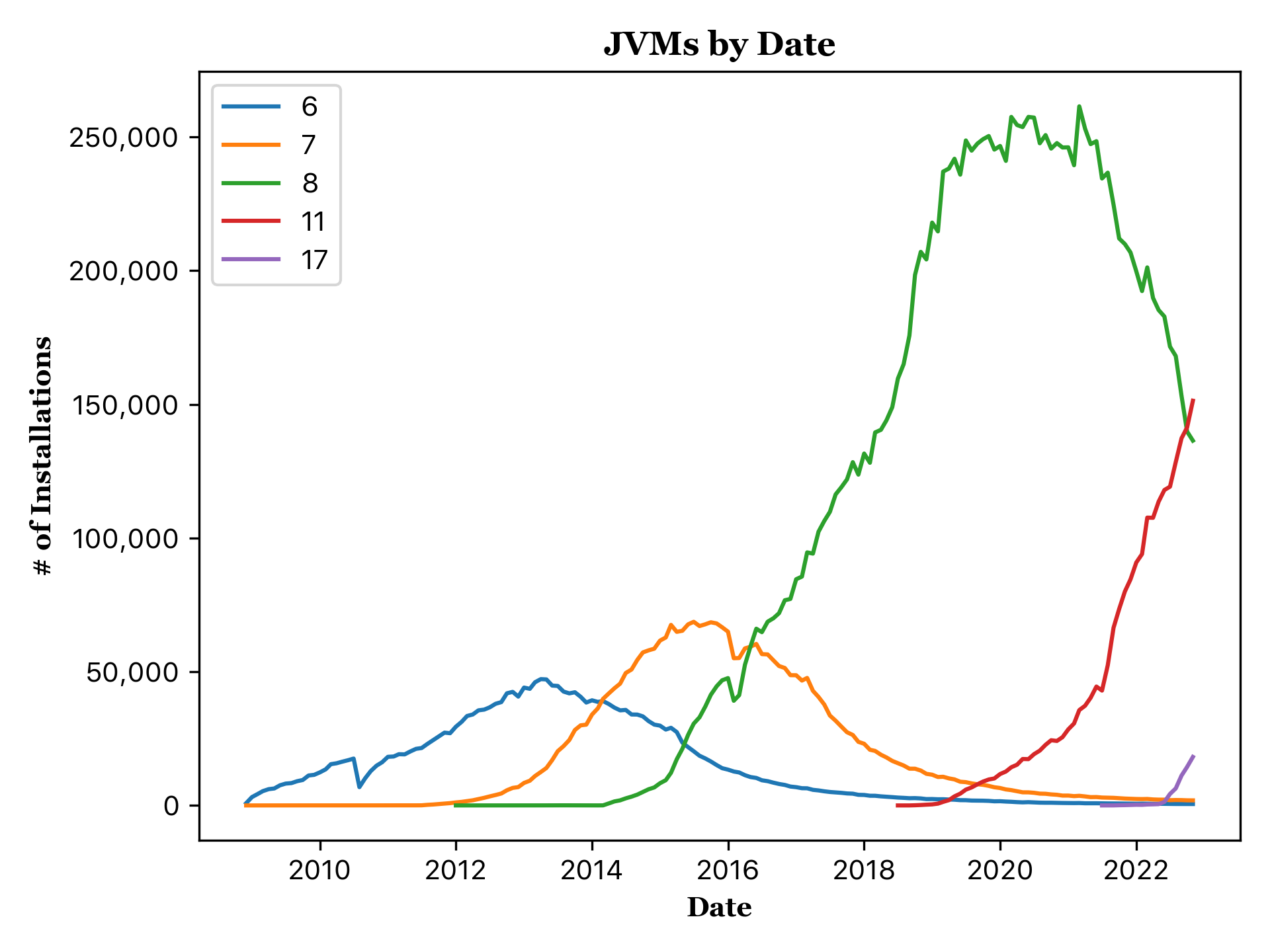 With all known production issues on Java 17 resolved, we continue to encourage users to upgrade to Java 17, particularly in light of the fact that many Java vendors plan to stop providing free public updates for Java 11 on or after October 2024. Report any issues running on Java 17 in JENKINS-67908. The Versions Node Monitors plugin, which helps keep track of Java versions across agents, has also been recently updated.

With the migration to Java 11 now well underway for both end users and Jenkins core alike, the focus has shifted to the plugin development toolchain. With the developer documentation now recommending 2.361.4 as a baseline for plugins, this raises the question about when to require Java 11 for plugin development.

Historically the Jenkins project has supported old baselines for a long time in the plugin build toolchain, with recent versions of the plugin build toolchain supporting baselines up to two (2) years old. This provides a high degree of flexibility for plugin maintainers and ultimately end users. For the reasons given on the developer mailing list, however, this level of compatibility could not be preserved throughout the transition to Java 11. We therefore took the decision to require a baseline of 2.361 or newer for plugins in recent releases of the plugin build toolchain, about a year ahead of our usual timeline. This unusually aggressive timeline does not represent a change in policy for the Jenkins project but is rather an exception to the rule to facilitate migration to a number of breaking changes in the upstream Java community.

Such a transition constitutes a flag day, or breaking change. Below are answers to frequently asked questions, inspired by Uma Chingunde’s excellent framework for communicating organizational changes and building on the excellent cheat sheet started by Jean-Marc Meessen.

What is the change?

Beginning with 4.52, the plugin build toolchain requires Java 11 or newer and Jenkins 2.361 or newer.

When is the change effective?

Why is it happening?

Due to a large number of breaking changes in the upstream Java community, it became impractical to support both Java 8 and Java 11 in the same build toolchain. For more details, see the developer mailing list.

Who is affected by the change?

This change affects all plugin developers, particularly those who receive updates to the plugin build toolchain via Dependabot pull requests.

What action do I need to take?

At a high level, three actions need to be taken, the third of which depends on the first two:

We will elaborate on each of these three points below.

Adjust the Jenkinsfile to use Java 11 or newer

First, consult the matrix of build configurations in the plugin’s Jenkinsfile. The goal is to ensure the plugin is building on Java 11 and 17 and not on Java 8, as recommended in the latest version of the archetype:

Some older Jenkinsfiles may not have an explicit list of configurations:

Such builds will use the defaults for buildPlugin(), which (at the time of this writing) are Java 8 on Linux and Windows. Since plugin parent POM 4.52 and newer require Java 11, such a configuration is incompatible, and it should be changed to an explicit configuration that includes Java 11 and 17 as shown above.

Jenkinsfile has been modified in an untrusted revision

Pending JENKINS-46795, the pull request will need to be refiled by someone with write access to ensure the Jenkinsfile changes take effect.

Update the baseline to 2.361 or newer

The process for updating the baseline is described in the developer documentation. To summarize, set the jenkins.version property in pom.xml to 2.361 or newer:

The baseline is often encoded in one other place in pom.xml: the version of the plugin BOM. Check the <dependencyManagement> section for an entry with the group ID io.jenkins.tools.bom and an artifact ID that starts with bom-. If there is such an entry, and if it is using a line older than the baseline, then update it to match the baseline. For the latest version, see the list of BOM releases. At the time of this writing, the latest version is 1750.v0071fa_4c4a_e3:

For more information about the plugin BOM, see its README.

Update the plugin parent POM to 4.52 or newer

When updating the plugin parent POM from a version older than 4.39, you may run into an error like the following:

This was a flag day introduced in 4.39. See the release notes for more information.

Similarly, be on the lookout for warnings like these:

Now is a good time to address them as suggested, though doing so is not mandatory.

Yes! Consult jenkinsci/text-finder-plugin#138 for an example.

What happens if I fail to take action?

Nothing will happen in the immediate future if you do not cross this flag day. You can still build and release plugins with Java 8 and their current baseline. In the long term, however, an out-of-date plugin build toolchain creates the risk of plugin compatibility testing (PCT) failures and negatively impacts the Jenkins core development team.

If you neglect to update the baseline to 2.361 or newer, you will receive the following error:

This version of maven-hpi-plugin requires Jenkins 2.361 or later.

If you neglect to update the Jenkinsfile to remove any Java 8 configurations (or try to build locally with Java 8), you will receive a low-level class version error:

If you have doubts or if the information in this post does not work for you, do not hesitate to discuss the matter on the developer mailing list.

What future work is planned?

We recognize that maintaining plugin builds can be onerous for many, especially when crossing flag days like this. Like linkers and loaders, Jenkins plugin build maintenance is a sub-specialty within a sub-specialty. In the long term, we aspire and hope to automate much of this build maintenance to allow the community to focus its attention on the delivery of features and bug fixes. In the meantime, we appreciate the community’s patience and support as we pass through these periods of transition.

Basil is a long-time Jenkins user and contributor, a Jenkins core maintainer, and the maintainer of the Email Extension, Timestamper, and Swarm plugins (among others). Basil enjoys working on open source software in his free time.