Integrating Jenkins with Alexa to launch your pipelines and obtain results about your deployments through voice is easier than you think. Learn how Alexa Champion, Kesha Williams', latest side project teaches Alexa to deploy code to the cloud.

Alexa (named after the ancient library of Alexandria) is Amazon’s Artificial Intelligence (AI) powered intelligent voice assistant that runs in the cloud. Software engineers make Alexa smarter by creating apps, called skills. From the time that I developed my first Alexa skill, I dreamed of deploying my Java projects to the cloud via voice. For me, telling Alexa to deploy my code is the ultimate level of cool! I recently made my dream a reality when I devoted a weekend to developing my newest Alexa skill, DevOps Pal. In this blog, I will show you how I developed DevOps Pal and hopefully inspire you to build your own version.

Why Choose Voice to Deploy Code

Voice-first technology is revolutionizing how we interact with technology because the interaction is simple, frictionless, and time-saving. For me, voice is an easier way to control Jenkins and retrieve results about my deployments without having to touch a keyboard. In this use case, voice is another access point for data and is a way to further automate the process of building, testing, and deploying a Java project to the cloud, improving efficiency.

If you’re working with DevOps, you understand the need for Continuous Integration and Continuous Delivery (CI/CD) to automate the software delivery pipeline in a reproducible way. CI/CD is the practice of continuously building, testing, and deploying code once it’s committed to version control. DevOps and CI/CD provides software engineering teams with confidence in the code being pushed to production and shorter development lifecycles, which in the end produces happier users, clients, and customers.

DevOps Pal is a private Alexa for Business skill that is used to kick off a Jenkins pipeline job. Alexa for Business was the perfect way for me to distribute DevOps Pal since I have the ability to enable the skill on an organization-by-organization basis, which gives me complete control over who has access. Once DevOps Pal invokes the job, the pipeline status displays in real-time via the Blue Ocean Pipeline Run Details View Page.

I used several components and tools to create DevOps Pal. Let’s review the architecture in detail. 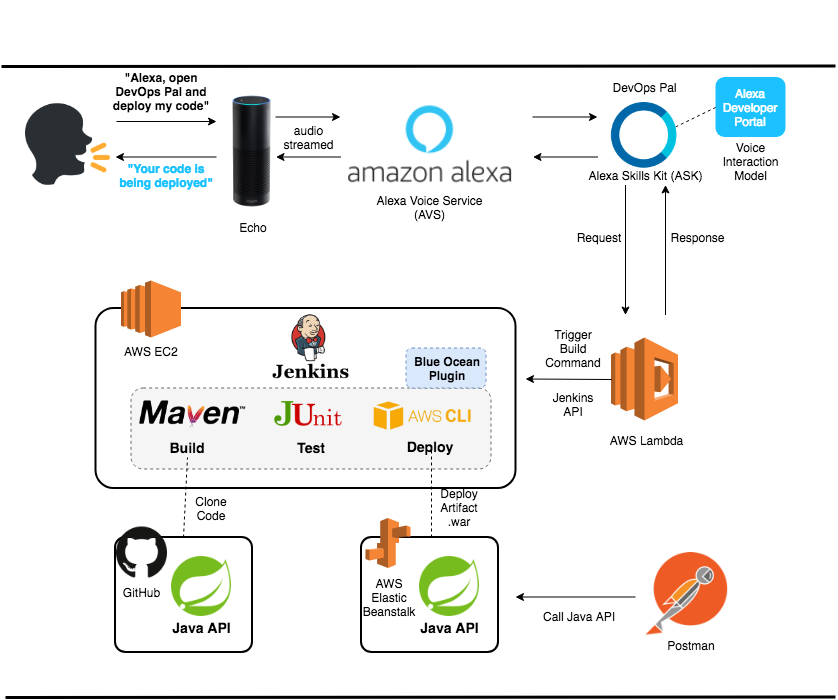 The flow begins by saying, "Alexa, open DevOps Pal and deploy my code", to the Echo device.

The Echo device listens for the wake word (e.g. Alexa, Echo, Computer, or Amazon), which employs deep learning technology running on the device to recognize the wake word the user has chosen. Once the wake word is detected, what I say is recorded and sent to the Alexa Voice Service (AVS), which uses speech to text and natural language understanding (NLU) to identify my intent. My intent is sent to DevOps Pal; the skill acts accordingly by kicking off the Jenkins job and sending a response back using text-to-speech synthesis (TTS), which makes the response natural sounding.

The Voice User Interface (VUI) describes the overall conversational flow and is setup via the Alexa Developer Console. 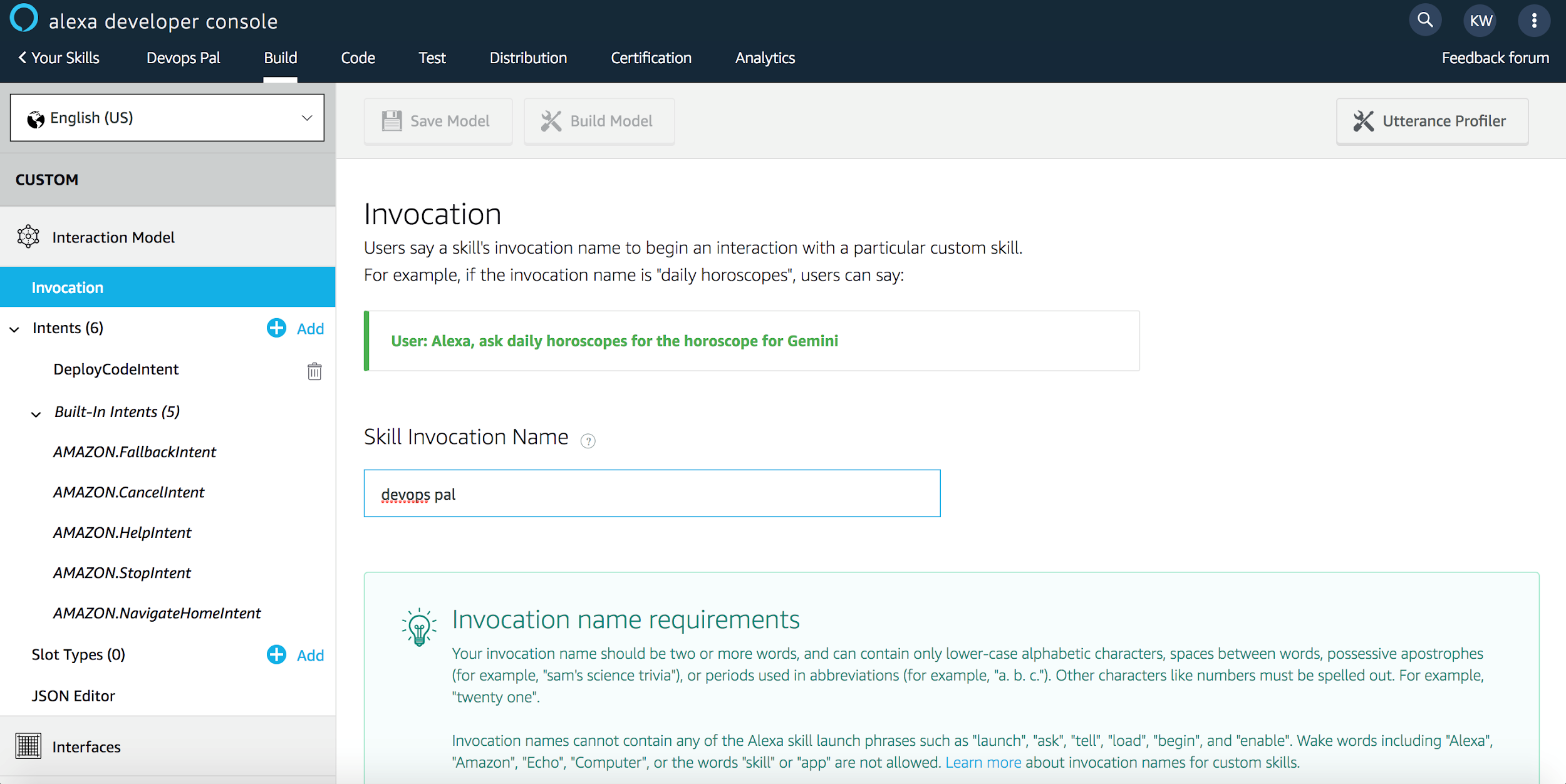 A few important components of the VUI are the Invocation Name (how users launch your skill) and the Intents (phrases a user says to "talk to" or interact with your skill).

Specifically, the "DeployCodeIntent" is invoked when a user says one of several phrases (e.g. run jenkins pipeline, run jenkins job, deploy the code, deploy code, or deploy ) or a variation of the phrase like, "deploy my code". 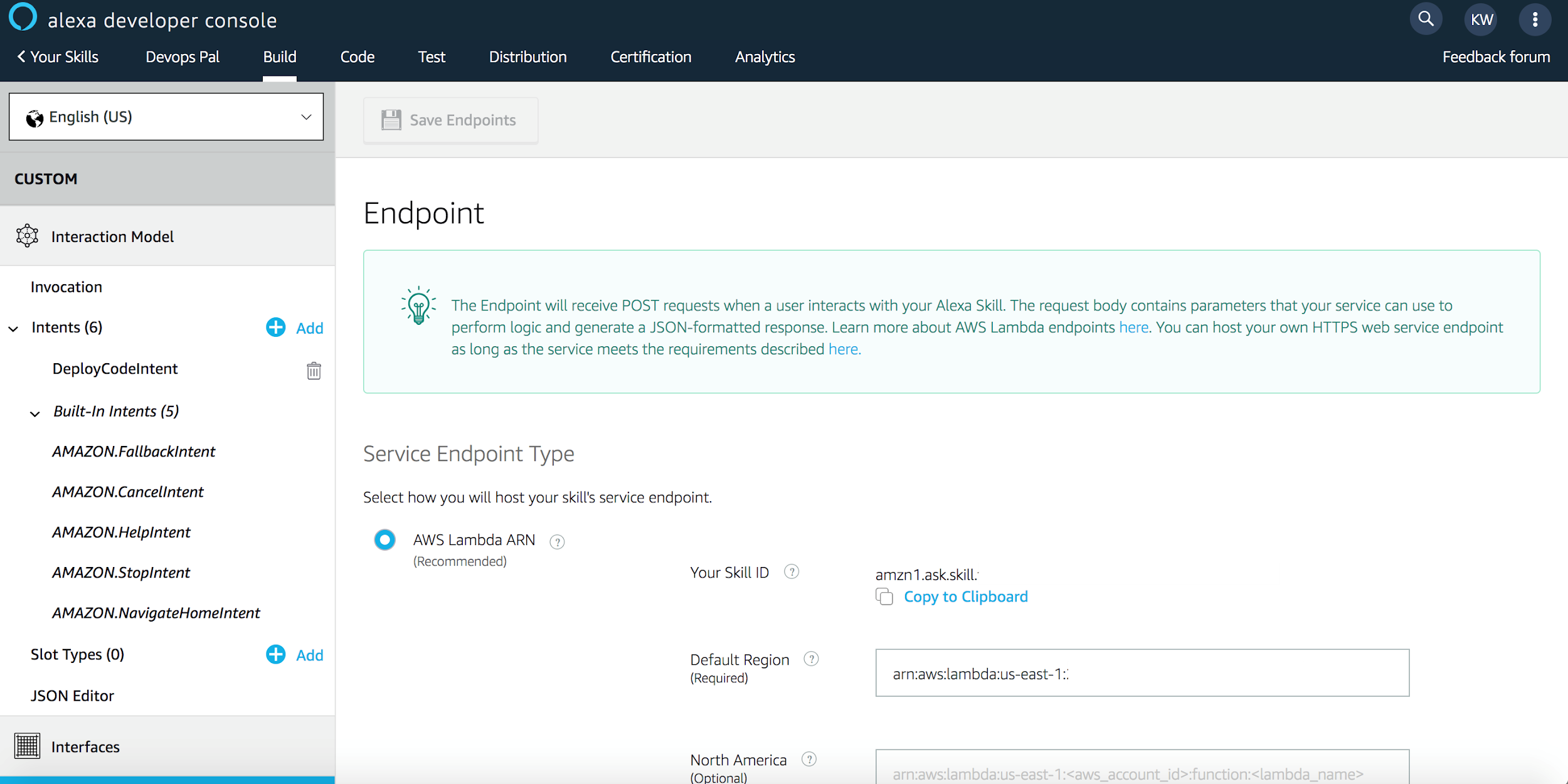 The endpoint is the destination where the skill requests are sent for fulfillment. In this case, the backend logic is an AWS Lambda authored in Python. The business logic in the Python Lambda uses the Jenkins remote access API to trigger the job remotely. The format of the URL to trigger the job is jenkins_url/job/job_name/build. The API call uses BASIC authentication and a Jenkins Crumb passed in the HTTP request header for CSRF protection. Alternatively, since Jenkins 2.96, you can use an API token instead of a Jenkins Crumb and password to authenticate your API call.

The Jenkins job, 'alexa-cicd', is the job invoked from DevOps Pal. Although, the Jenkins Classic User Interface (UI) is functional, I prefer the Blue Ocean interface because it rethinks the user experience of Jenkins by making it visually intuitive. Blue Ocean is easily enabled via a plugin and leaves the option to continue using the Jenkins Classic UI should you so choose.

After Alexa kicks off the 'alexa-cicd' job, I navigate to the Pipeline Run Details View Page, which allows me to watch the job status in realtime. This job has four stages: Initialize, Build, Test, and Deploy. The final stage, Deploy, uses the AWS Command Line Interface (CLI) on the Jenkins server to copy the artifact to Amazon Simple Storage Service (S3) and create a new Elastic Beanstalk application version based on the artifact located on S3.

The ability to deploy code with voice is just the beginning. There are several cool features that can easily be added:

I hope you’ve enjoyed learning more about the architecture of DevOps Pal and deploying code to the cloud using Jenkins and voice. For more detailed steps, I’ve collaborated with Cloud Academy to author a course, AWS Alexa for CI/CD on the subject.