Run Your API Tests Continuously with Jenkins and DHC

Modern mobile apps, single-page web sites and applications, are more and more relying on Web APIs, as the nexus of the interaction between the frontend and the backend services. Web APIs are also central to third-party integration, when you want to share your services with others, or when you need to consume existing APIs to build your own solution on top of their shoulders.

With APIs being a key element of your architecture and big picture, it’s obviously important to assess that this API is functioning the way it should, thanks to proper testing. Your framework of choice, regardless of the technology stack or programming language used, will hopefully offer some facilities for testing your code, whether in the form of unit tests, or ideally with integration tests.

From a code perspective, as I said, most languages and frameworks provide approaches to testing APIs built with them. There’s one I wanted to highlight in particular, which is one developed with a DSL approach (Domain-Specific Language), using the Apache Groovy programming language, it’s AccuREST.

To get started, you can have a look at the introduction, and the usage guide. If you use the contract DSL, you’ll be able to write highly readable examples of requests you want to issue against your API, and the assertions that you expect to be true when getting the response from that call. Here’s a concrete example from the documentation:

Notice that the response is expected to return a status code 200 OK, and a Location header pointing at /users/john. Indeed, a very readable way to express the requests and responses!

Tooling to test your APIs

From a tooling perspective, there are some interesting tools that can be used to test Web APIs, like Paw (on Macs), Advanced REST client, Postman or Insomnia.

But in this article, I’ll offer a quick look at DHC, a handy visual tool, that you can use both manually to craft your tests and assertions, and whose test scenarios you can export and integrate in your build and continuous integration pipeline, thanks to Maven and Jenkins.

At the end of this post, you should be able to see the following reporting in your Jenkins dashboard, when visualising the resulting API test execution: 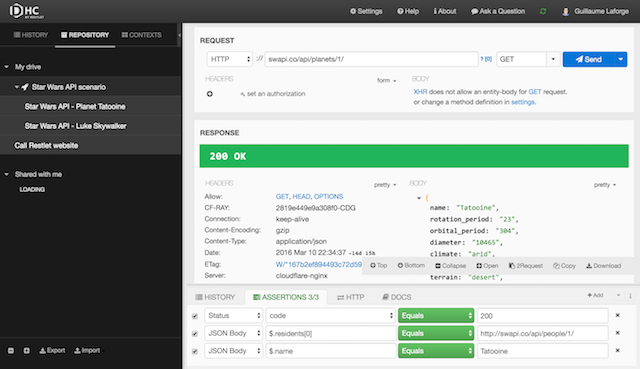 In the main area, you can create your request, define the URL to call, specify the various request headers or params, chose the method you want to use, and then, you can click the send button to issue the request.

In the left pane, that’s where you’ll be able to see your request history, create and save your project in the cloud, or also set context variables.

The latter is important when testing your Web API, as you’ll be able to insert variables like for example {localhost} for testing locally on your machine or {staging} and {prod} to run your tests in different environments.

In the bottom pane, you have access to actual raw HTTP exchange, as well as the assertions pane.

Again, a very important pane to look at! With assertions, you’ll be able to ensure that your Web API works as expected. For instance, you can check the status code of the call, check the payload contains a certain element, by using JSON Path or XPath to go through the JSON or XML payload respectively.

Beyond assertions, what’s also interesting is that you can chain requests together. A call request can depend on the outcome of a previous request! For example, in a new request, you could pass a query parameter whose value would be the value of some element of the JSON payload of a previously executed request. And by combining assertions, linked requests and context variables together, you can create full-blown test scenarios, that you can then save in the cloud, but also export as a JSON file.

To export that test scenario, you can click on the little export icon in the bottom left hand corner, and you’ll be able to select exactly what you want to export: 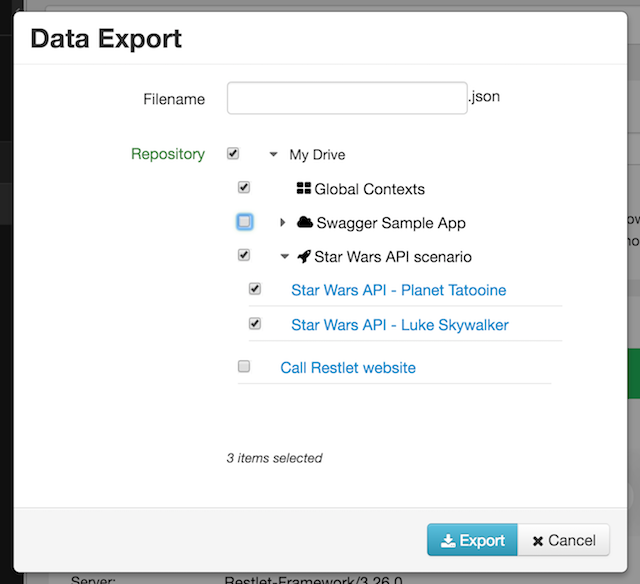 Now things become even more interesting, as we’ll proceed to using Maven and Jenkins! As the saying goes, there’s a Maven plugin for that! For running those Web API tests in your build! Even if your Web API is developed in another technology than Java, you can still create a small Maven build just for your Web API tests. And the icing on the cake, when you configure Jenkins to run this build, as the plugin outputs JUnit-friendly test reports, you’ll be able to see the details of your successful and failed tests, just like you would see JUnit’s!

Once you’ve configured your Jenkins server to launch the test goal of this Maven project, you’ll be able to see nice test reports for your Web API scenarios, like in the screenshot in introduction of this article!

Next, you can easily run your Web API tests when developers commit changes to the API, or schedule regular builds with Jenkins to monitor an online Web API.

For more information, be sure to read the tutorial on testing Web APIs with DHC. There are also some more resources like a screencast, as well as the user guide, if you want to learn more. And above all, happy testing!